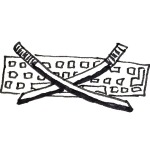 There are software developers much more skilled than what is usually called “guru”. I call them “samurai” developers.

By the end of the 12th century, samurai became almost entirely synonymous with bushi, and the word was closely associated with the middle and upper echelons of the warrior class. The samurai followed a set of rules that came to be known as bushidō. /Wikipedia/

So here is a code of conduct of the samurai developer. It is definitely not bushidō direct adaptation, but mostly a poetic interpretation of what is associated with samurais.