Recently I’ve changed my MacBook US keyboard to European one. Everything is fine with it except for the Tilda(~) key, which is located between Left Shift and Z keys on the EU keyboard, whereas usually it is located under Esc key on US and most PC keyboards. I do not know what was the purpose of this relocation or what historical background are behind it; I don’t care. What I care is that such location makes the use of Tilda key very annoying. And here is how I’ve solved it.

END_OF_DOCUMENT_TOKEN_TO_BE_REPLACED 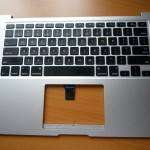