There is a little emotional and psychological problem I call “sticky authorship” syndrome. When you create something — a web site, a picture, an application — you inevitably become its author for life. No matter how long time ago it was, and how perfect you are nowadays, you are still the author and your work still characterizes your professional level.

Since our past produce (as seen from the future) are always far from perfect, we are usually ashamed by its mere existence. And we desire to re-make it, despite of the absence of time to do that or the boredom we will suffer while doing that. Inability or reluctance to remake it causes stress and depression.

When I started to make web sites for money, approximately in 2005 (almost 9 years ago), my first freelance contract was a site for local kindergarten. Here it is: doy306.ru.

Honestly, now I am ashamed that it is my work and it is still online. It is so inaccurate, raw and clumsy. Well, the graphical design was not mine, but everything else is mine: back-end, front-end, markup, etc. Only my professional youth and naiveness can excuse me for doing this.

Just to mention: it is not visible to the users, but on its backend side it has a self-made event-driven CMS where different modules and micro-components (such as identification, list-item models, renderer, etc) send messages to each other via a central message bus, and receive callbacks (also via events) if the message assumes it should return some results. I had invented erlang-over-PHP before it became popular :-)

The problem of “sticky authorship” is a moral obligation to perpetually support and improve your past work till the legal owner decides to cease its existence.

First, “sticky authorship” is no more than a moral obligation. All legal and financial liabilities disappear when your contract is over and your job is done.

Second, it is usually authors themselves who bear these obligations. The holders of the product are fine without authors’ help or participation. Otherwise they would offer a support contract.

People tend to believe that they are obliged to support their product because of their beliefs that all their past products define their current professional image. But do they? 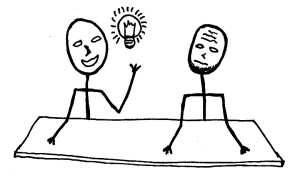 Lets do a thought experiment. Assume you are sitting in front of two people. They never saw each other, so as they never heard of each other.

One is a young smart guy with little experience in the field. He strives to create a super-cool trendy shiny thing with all the tricks and tools he heard of recently. And he does his best.

The other one is a mature men with a decade of experience in the same field. He knows how the field’s market works, and how to earn money, no matter how shiny or trendy things are. And he has a job ;-)

Now you say to the second (mature) one: “This thing is not shiny enough. Why did this greenhorn to your side could not make it more shiny? Go fix it yourself, because you are also black-haired and this makes you responsible for thing’s shine.”

But when these two different persons are not distinct meat bags, but the same physical body at distant moments in time, things turn other way: the mature one becomes responsible for the shiny thing made by the young one.

Something is wrong with this approach. 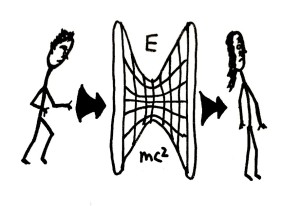 I could not even find proper name in a list of cognitive biases. So it is probably a new unexplored one. It is similar to status quo bias, but differs in object (which is a person and specifically their obligations) and baseline in time (which is past, not current). Or it is similar to projection bias, but an observer projects past person image to the current one (instead of projecting own image to others).

Note that an “observer” is not necessary someone from the outside, or specifically a product holder. It is usually the authors themselves, who believe they are “responsible” and “obliged” to perpetually improve their product.

“Sticky authorship” cognitive bias brings discomfort, which causes stress, which in turn causes depression. That is why it should be treated as a psychological disorder. Not the most dangerous disorder, but yet a disorder.

First, you should learn to notice your thoughts and feelings on false “obligations” whenever and wherever they come to your mind.

Second, when you have caught such feeling, say to yourself that you are not obliged to do that work anymore. The job was done, the product was finished, and you did your best. Product owners were satisfied with product’s quality and they paid exactly for what they have gotten (otherwise it is another case and should be handled in legal/contractual field).

Third, once you have convinced yourself and found a peace of mind, imaging that if someone would ask for the same work these days, you would do it much better. That is because you have significantly improved over time. But this time this contract would be much more expensive for the buyer due to new product’s higher quality. And it would be less interesting for you, since it will not improve you anymore as it did years ago. So both the buyer and you would not be interested in such contract.

Fifth, and I say this as a person who interviewed maybe hundreds of software developers, nobody cares what you did in past. People look for what you can do and will do for them in the future. They use your past (CV) and present (portfolio) just to guess your future, no more, no less.